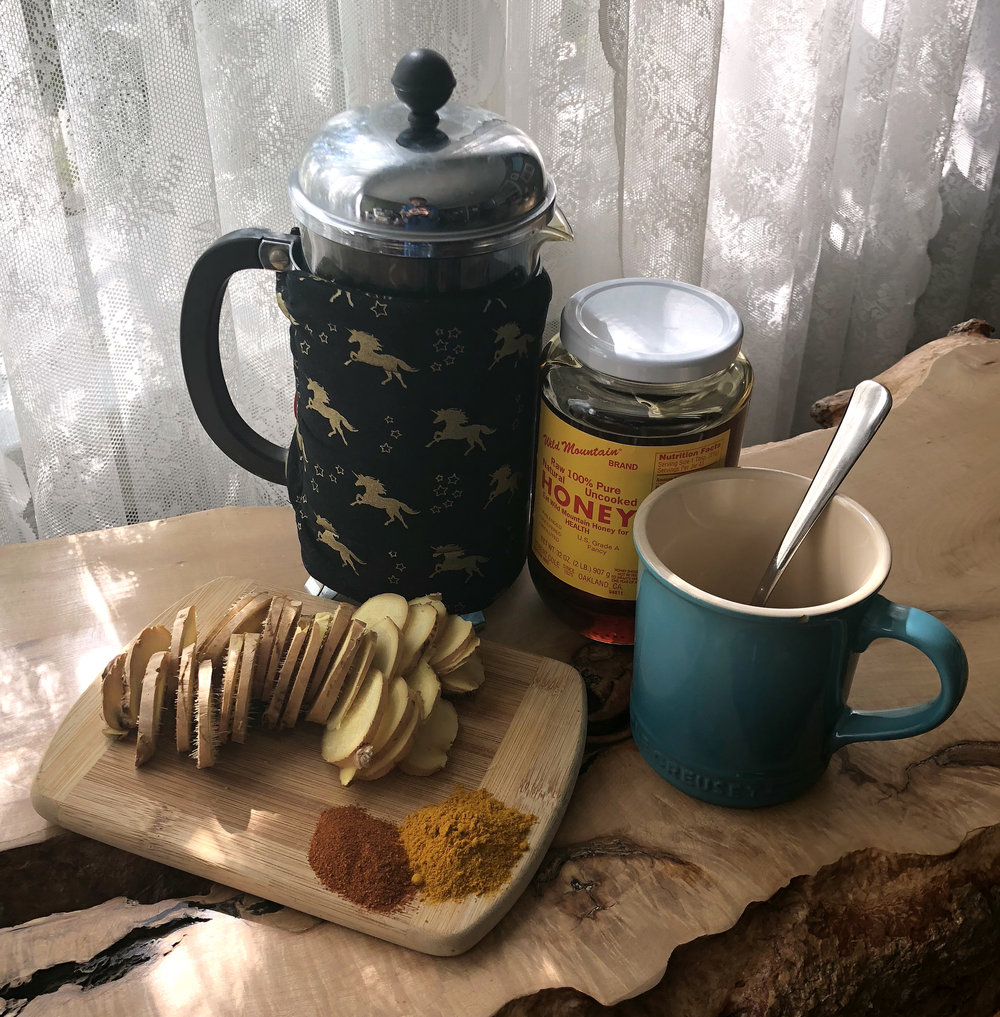 I have a deviated septum. Until I found this out in 2013, I thought I had terrible allergies and/or a terrible immune system. It turns out that I just have a skull that conspires to restrict drainage, meaning that any – ANY – amount of sinus irritation leads to insane swelling, completely blocked nasal passages, horrible headaches, and eventually sinus infections. Since I avoid taking antibiotics whenever possible (I want them to work when I really need them), I sought out other means of relieving my recurrent acute sinus pressure without the surgery recommended by doctors. And I found something. And now I want to share that with you!

Put a full kettle of water on the stove to boil. While it heats, wash and slice up the ginger and then toss the ginger, turmeric, and cayenne in a medium sized (3 cup) french press. Wrap the french press in a kitchen towel to hold the heat. When the water boils, fill the french press, cover, and let steep for 10 mins before pressing. Pour into a cup over a spoonful of local honey and enjoy!

Maybe you too have a deviated septum, maybe you have allergies, maybe it’s just winter. It doesn’t matter. Every ingredient in this tea has anti-inflammatory properties. The ingredients themselves and the heat of the tea ease the sinuses open so they can drain and help the tissue to relax and release. This works whether the sinus swelling is caused by irritants, allergies, or a cold. When I feel my sinuses setting up, I set myself down on the couch and drink pot after pot of this tea all day, then get a good night’s sleep. I wake up able to breathe again. Making it in the french press makes the process so easy to execute that even at my sickly whiniest, I manage it without complaining.

BONUS TAROT TIE-IN: Ginger and cayenne are both strongly associated with the element of Fire. If you have received an indication that you would benefit from a strong Wands/Fire influence in your life (a boost in intuitive powers and ability to take decisive action), this is a great way to get that energy into your body. I believe that this elemental energy is one of the reasons it works so well as a health tonic – it boosts your ability to manifest wellness!

Enjoy, babes! Here’s to your health!

Sorry, the comment form is closed at this time.